A gray iron cylinder head for a large natural gas engine block application showed persistent gas defects right under the top surface of the casting. The defects showed up only at the top of massive solid towers, which later are drilled out to house the head bolts. The foundry placed needle-shaped vents on top of these areas, to no avail. An initial evaluation with MAGMASOFT® confirmed that the defects found in the castings were indeed caused by core gases, as no shrinkage defects where shown. Displaying the areas that are solidified by 1 % throughout the casting process showed that a casting skin forms on the top of the casting about 1 minute into solidification. The needle vents were already solidified by then. At the same time, some core surfaces where exposed to completely liquid metal, allowing core gases to flow into the melt and rise toward the dome shaped by the solidification front.

Utilizing a wedge-shape design, which replaced the non-functional needle-vents, the build-up of a casting skin was delayed until all internal core surfaces were covered and the gases could escape into the mold. Casting trials with this design confirmed the successful elimination of the gas defects. 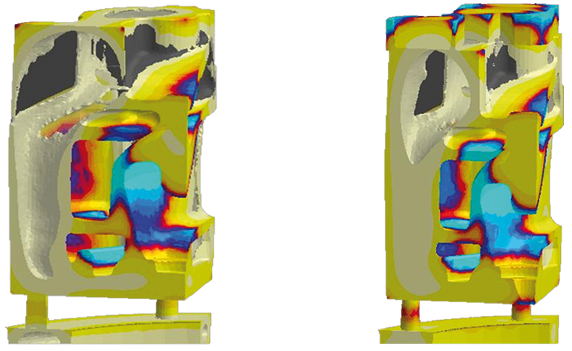 The 1 % fraction solid front shows where gas is trapped (left). Addition of wedge-style feature allows gas to vent out of casting (right)