In 2012, the foundry of VÍTKOVICE Heavy Machinery a.s. produced the heaviest steel casting in its history, which was successfully shipped to the customer this spring. The project involved a large steel frame (6.49 x 6.49 x 2 m, GS 20Mn5) for a high-speed forging machine.

The steel frame‘s gross weight was an astonishing 380 tons. Just the production of a wooden model in the pattern shop took more than 1600 man-hours of labor. The sand mold was made from furan-bonded silica and chromite sand. Various protective and insulating coatings were applied on the mold surface. Sand and coating types were selected based on experience and subsequently validated by MAGMA5. Among other aspects, the simulations assessed the thermal impact inside the casting and the mold during solidification, including sand burn-on or penetration of metal into the sand mold.

The molding process took approximately 500 hours. Due to the size of the casting, 5 ladles with a total capacity of 280 tons were employed simultaneously during pouring. After a certain time, which was estimated with the help of MAGMA5, filling of open feeders was performed from an additional two ladles (68 tons and 32 tons). It was very important to secure an absolute synchronization, both during the actual production of the molten steel and also during pouring from the five ladles, in order to accomplish the base filling in less than 300 seconds. After this time, the molding material starts to degrade thermally, which may lead to a reduced internal and surface quality and to geometrical inhomogeneity. 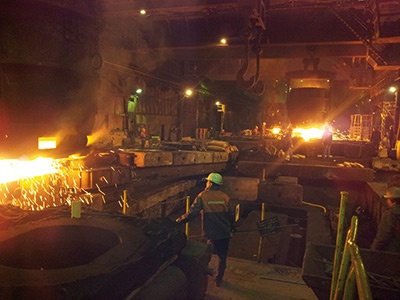 Every single process condition or technological modification was thoroughly thought through, discussed, and tested in MAGMA5 in order to prevent potential failure during production. Temperatures inside the mold and the casting were monitored during solidification and cooling with thermocouples and subsequently compared with thermal fields predicted by MAGMA5.

Due to the quite complex casting geometry and risk of hot tears and residual stresses, simulation of the stress-strain behavior during solidification and cooling was performed using the module MAGMAstress. The analysis of the initial layout revealed that the junctions between the heaviest sections and the thin-walled sections will be prone to hot tearing. The root cause was that the thin sections started to solidify and cool rather quickly, resulting in volumetric shrinkage and increased material strength, while the heavy sections remained in the dangerous mushy state with basically no resistance against the tensile loading initiated by the thin areas. On top of that, the feeders placed above the heaviest sections were obviously not able to deliver liquid metal quickly enough to prevent or heal the hot tears. It was therefore essential to optimize the chill placement and add protective cooling ribs to minimize this risk.

The stress simulations revealed that below the solidus temperature the central sand core and all other internal cores did not allow the casting to contract and distort freely. One could say that the cores behaved almost totally rigidly. This led to an additional high risk for cold cracks and high residual stresses in the casting. To minimize these stresses, it was determined to be necessary to start the shake-out process and burning off of the risers at 700°C temperature. This gave the casting more freedom to contract and to distort freely and hence to relax the residual stresses. This process was very complicated for the foundry personnel, who were obliged to wear special fire-resistant clothes while burning off the risers. Moreover, several concrete plates had to be placed on top of the sand mold in order to be able to walk on the very hot sand. A special ventilation system was provided to the personnel and the entire process was monitored by a local fire squad.

The subsequent heat treatment was also analyzed in MAGMA5 to find the best process conditions to keep residual stresses under control. As a result of these combined efforts, both using simulation and on the shop floor, the casting was produced in the desired time frame and shipped to the final customer. 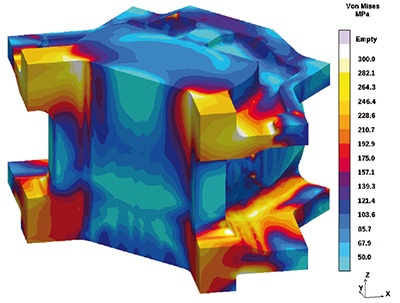 VÍTKOVICE Heavy Machinery a.s., with its foundry, is member of the large machinery concern VÍTKOVICE MACHINERY GROUP, located in Ostrava, Czech Republic. The first successful castings were made there in 1889. Its current area of focus is the casting of ultra-large and heavy steel castings, with a production capacity of up to 180 tons weight and with maximum dimensions of 8 x 30 x 6 m, which places the foundry in a premier position in Europe.

MAGMASOFT® has been in daily use since the year 2000. In order to set-up and evaluate several projects in parallel, an additional Pre-Post seat was installed in 2011. In this way, it has become possible to simulate 100% of the produced castings. In addition, 15% of all incoming project inquiries from customers are currently analyzed in MAGMA5 for a detailed casting yield and quality assessment. Due to the ever-increasing demand for quality and complex large castings, their second seat was upgraded to a two-core full MAGMA5 license in 2012. Currently, one four-core MAGMA5 license with the modules MAGMAsteel, MAGMAiron and MAGMAstress is used to analyze final versions of projects in terms of filling, solidification and stresses, while the second two-core license is used for fast assessments of casting feeding and for the design of rigging systems.

Shipping of the final machined casting to the customer in Alabama, USA 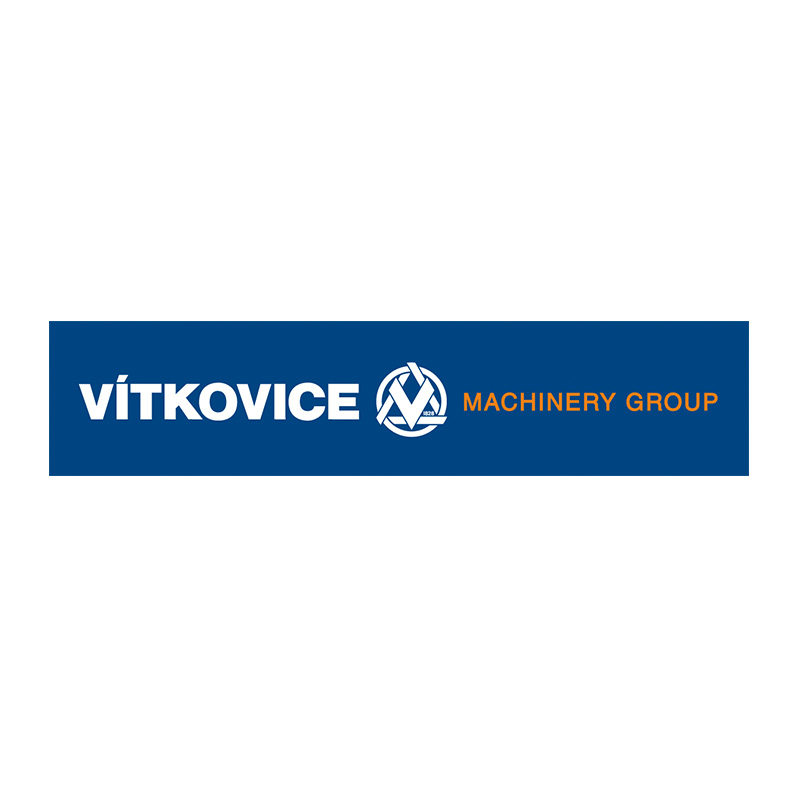