Profitability in high-pressure die casting processes demands a consistent quality that meets customer specifications. Supplying a product segment serving the automotive industry, it is mandatory to meet various quality requirements such as minimal porosity levels, leakage and leak resistance as well as dimensional consistency in the manufactured parts. To stay profitable, other variables such as melting losses, runner weight or consumable costs must be optimized consequently.

Kırpart used MAGMASOFT® to realize a weight reduction for their runner designs and through that generate cost savings. Before the project started, the runner and biscuit weight for the casting layout of the part shown here was a total of 2594 g. The main purpose of the project was to reduce the runner weight for the part, which was already in production. Using MAGMASOFT  ®, Kırpart investigated five different runner and gate designs for the part in question. In each design stage, especially the results from filling and the liquid fraction distribution during solidification were examined. The results are shown here are for both the original design and the final layout. The simulation studies confirmed that the casting quality could be maintained with runner designs having a smaller volume.

When looking at the runner cross-sections in the final design, it was observed that the velocity of the liquid metal increases proportionally on the way from the biscuit to the gate, and that the melt enters the cavity at an optimum speed. As can be seen, the velocity results show an increased velocity profile along the runner in comparison to the initial design.

Although the velocity changes in the runner during filling yielded the desired results, the effects of solidification on the part quality also had to be taken into consideration. The specific pressure was kept between 1000 - 1200 bar to obtain a sound casting which meets the porosity specifications. In order to take full advantage of the intensification pressure during the solidification phase, the runner branches were designed in such a manner to feed the last solidifying regions. 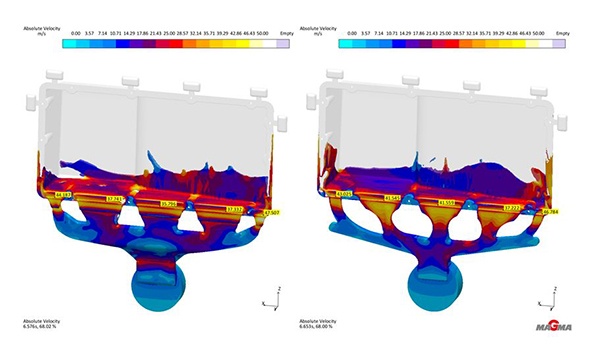 From the beginning of the project, each mold produced was continuously improved. MAGMASOFT  ®, which was still being evaluated at the beginning of the project, proved its reliability and became an indispensable tool for continuous improvement and optimized runner designs. The weight reduction improvements from the runner resulted in significant cost savings in production.

The final runner design showed a reduction of the runner to total casting weight from 29.68% to 20.28%, resulting in cost savings in many process steps. The achieved weight reduction of the runner led to opportunities to optimize the heat transfer by reducing the mold spraying time, and through the controlled solidification path, to shorten the cycle time by 10%. Reducing the cycle time of a part with an annual production of 400,000 units by 10% is greatly advantageous.

This study not only maximized the production efficiency, but also eliminated areas in the mold that are thermally out of balance and hence increased the mold efficiency. Every advantage gained in production helped Kırpart to meet increasing customer requirements. In the light of these challenging conditions, MAGMASOFT  ®'s contributions to the success of Kırpart’s future cannot be ignored. 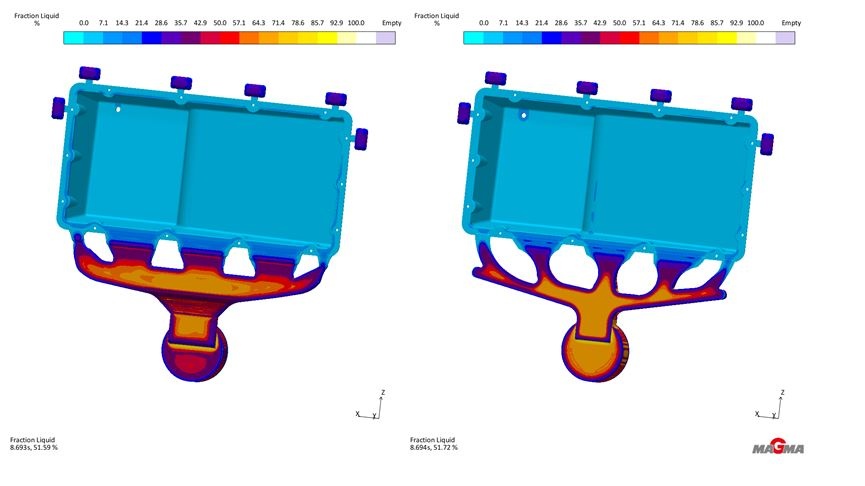 Kırpart A.Ş. is the leading engine component manufacturer in Turkey. The company has been a reliable partner and supplier to major automotive OEMs and Tier-1 companies globally since 1969. Kırpart, a dynamic and innovative company with advanced engineering capabilities, vast experience and skilled work force, specializes in designing, developing and manufacturing engine cooling system components such as thermostats and water and oil pumps. Kırpart’s aluminum high pressure die casting facility ensures optimum use of the capacity its production cells, including casting design, and offers its clients extensive experience in reduction of weight while ensuring performance of the compent.